Backpacking in the Black Canyon of the Gunnison National Park

With my heart racing, sweaty palms, and my forehead glistening with beads of perspiration, I locked in my carabiner to my harness. My sister synched me to the rope that was dangling down in front of me. Nowhere to be seen, my brother-in-law had led the rope, having climbed his way to the top, where I was to follow. They were waiting on me, waiting on me to hoist myself up to the rope with a 40 lb. pack on my back to get me the hell out of this canyon. And as I started to climb, I thought how did I, someone who has climbed only four times in her life, find myself face to face with the rugged wall of the Black Canyon? With my only way out, being to climb out? Here is my story about backpacking in the Black Canyon of the Gunnison National Park.

It all started with an innocent idea to fulfill a bucket list item of mine, backpacking in the Black Canyon of the Gunnison National Park. I have a goal (amongst so many others) to visit every one of the U.S. National Parks. Having already ventured to the other three parks in Colorado, the Black Canyon was last on the Colorado list. It was time to venture into the parts unknown (well almost unknown). I wanted to hike down to the bottom of The Black.

I find canyons to be mesmerizing, like a sunset. Somewhere you want to continue to the bottom of to see where it all began. I love looking up at what surrounds me, it somehow makes all my problems in the world seem so very small. I feel humbled by the grandeur of Mother Nature. Don’t get me wrong, I love hiking to the top of a mountain peak and taking in the views but there is something about finding yourself in the depths of the earth that is gripping. 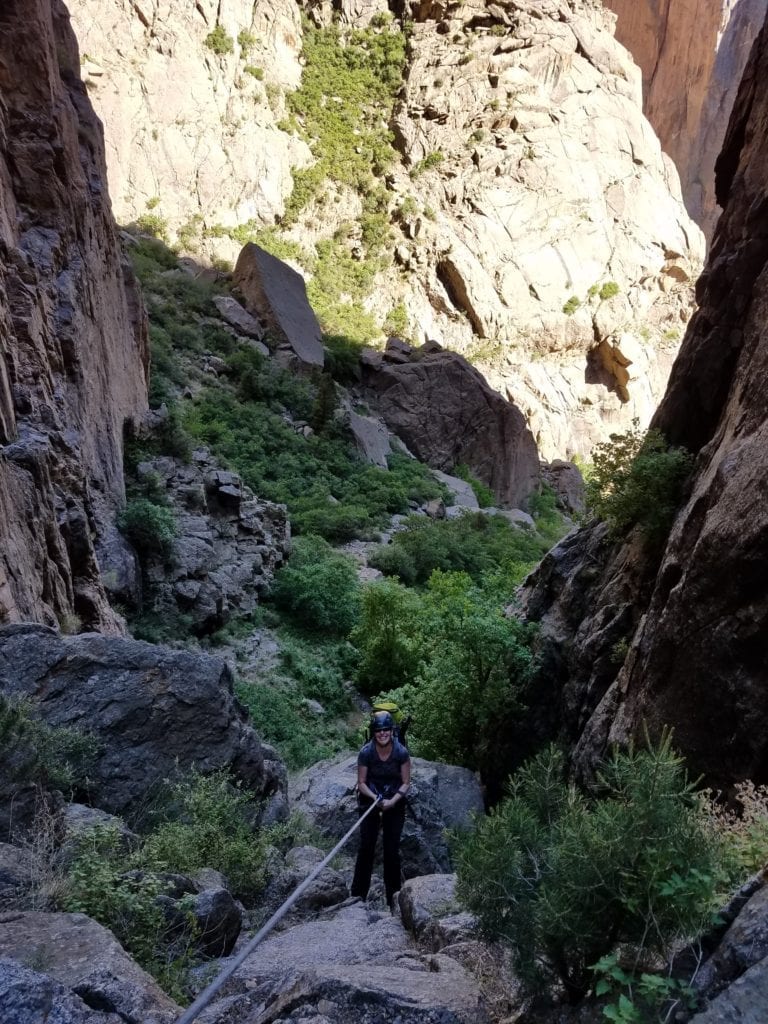 2nd repel down the Cruise Gully

“The Black” is serious business. With the steepest part of the canyon stretching some 2,700 ft. tall, it is the third largest sheer wall in the lower 48. Its landscape is unforgiving, riddled with loose rock, steep walls, groves of poison ivy, and some of the most epic climbing the state has to offer.

As a well-respected climbing spot within the climbing community, expert climbers, like my sister and her husband, come to The Black to gain hard-core bragging rights in the climbing world. So, because I don’t climb, the only way I was going to get to bottom was to repel down and spend the night and hike back out. 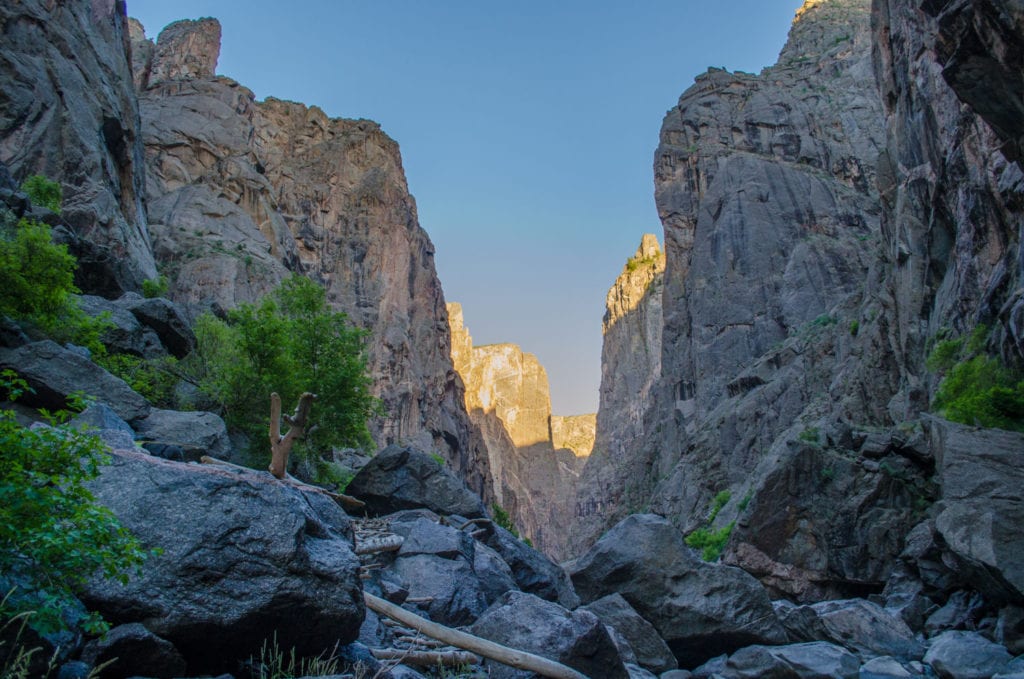 View from the bottom of Black Canyon

So we did just that. We set out on a Friday and we were out by that Saturday evening. But what happened between ended up giving me some hard-core bragging rights I hadn’t sought to gain. 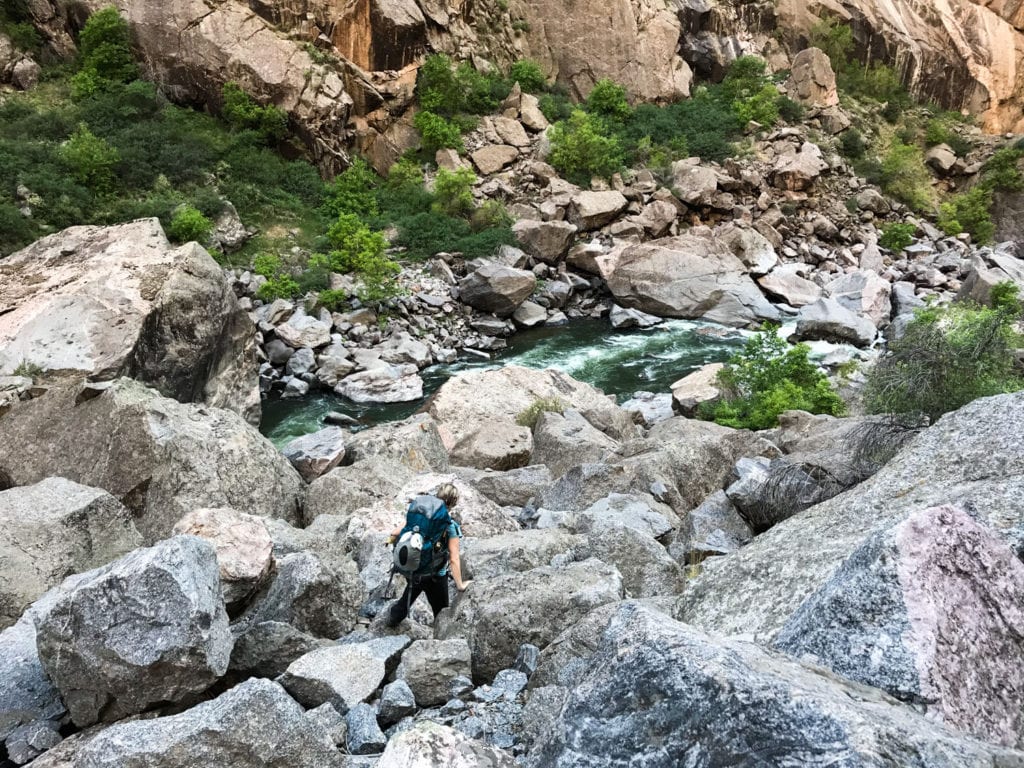 At the bottom of the Black Canyon

The plan was to start down the Cruise Gully, a 1,700 ft. drop of sheer rock that crumbles to the base of the canyon, where massive boulders meet the roaring river. After two rappels, we then continued on foot toward the bottom. I climbed over boulders, sidestepped groves of poison ivy, and worked desperately to find a good footing on the ground that felt like it could give out at any second. I became exhausted, beaten and ready for flat ground. It was getting dark and soon realized we would not be making it to our desired camp spot. I sat there on the rugged floor of the canyon, thinking I could sleep here. I can pull out my sleeping bag and sleep right here. I could not take another step, I had reached the end of my rope. 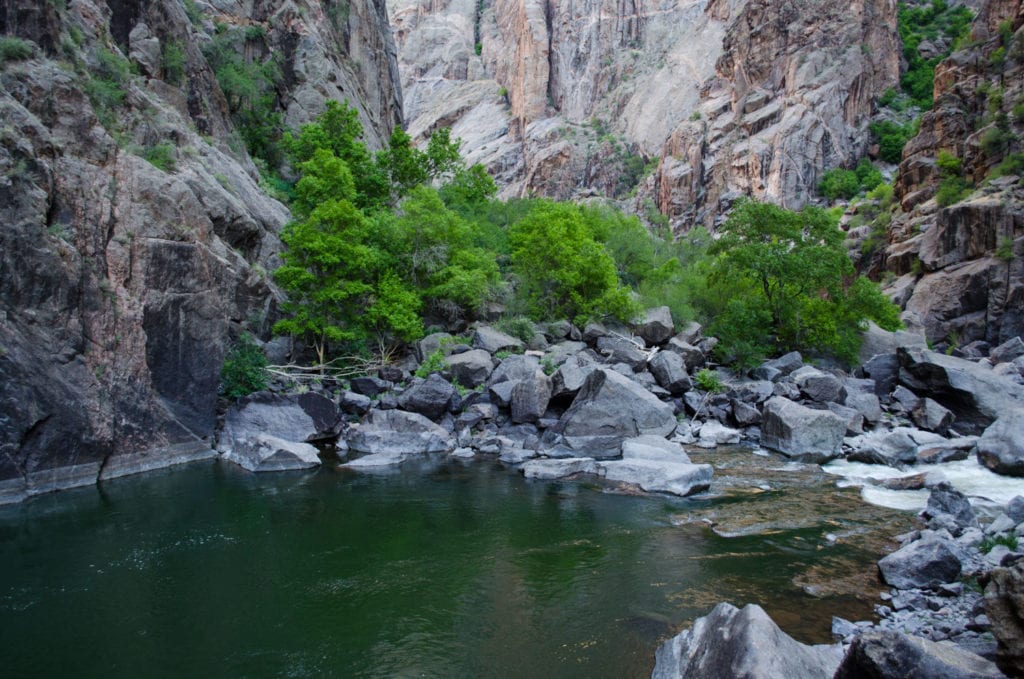 Gunnison River of the Black Canyon

So while we never found flat ground to set up camp, we did find a massive flat rock that jutted out onto the Gunnison River. So grateful for this boulder, we settled in as much as we could, with our sleeping bags providing only the comfort we could afford at that time. As I laid there, gazing up at a sliver of the sky, I watched as it got darker with the stars making their appearance for the evening. The walls of the canyon were the blackest black I had seen. They seemed to be almost so close together that you could simply walk over to the other side. I could have laid there forever, it was camping at its best. 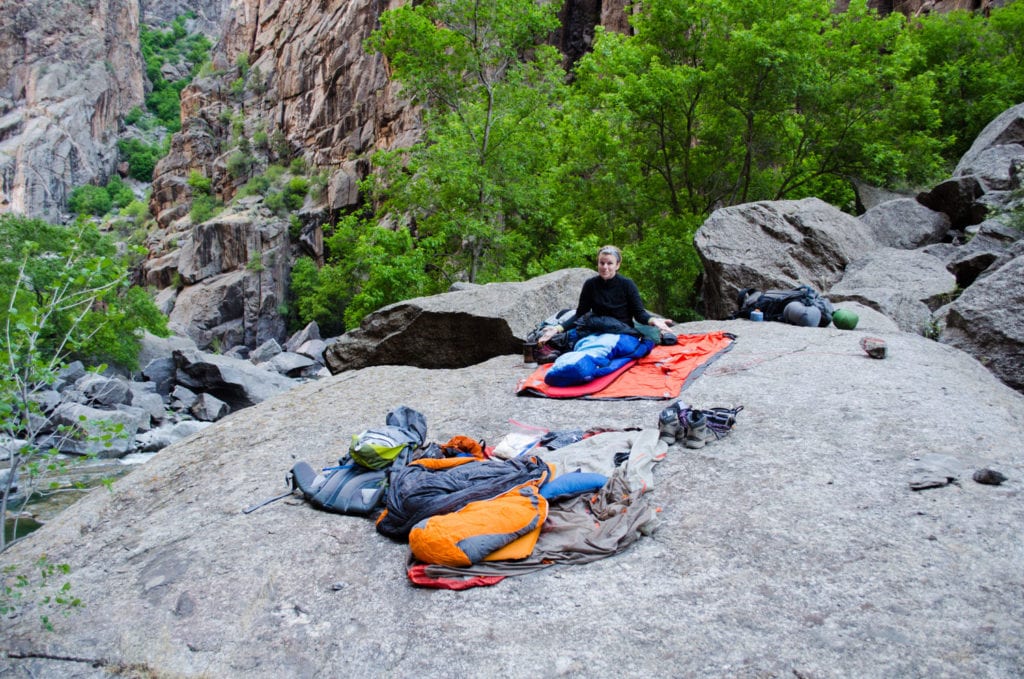 Our camp spot by the Gunnison River

The next morning we arose at our own pace to a crystal blue sky and nervous thoughts of how we were going to get out of this canyon. As my brother-in-law was fishing the rushing water beside us, he noticed there was an unexpected obstacle deterring us from the route we had planned on taking out. After much debating and reluctance, we decided to take the same route out that we took to get to the bottom. The obvious challenge staring me in the face was that I did not climb. How was this going to work? This was a climbing route, not a hiking route, out of the canyon. 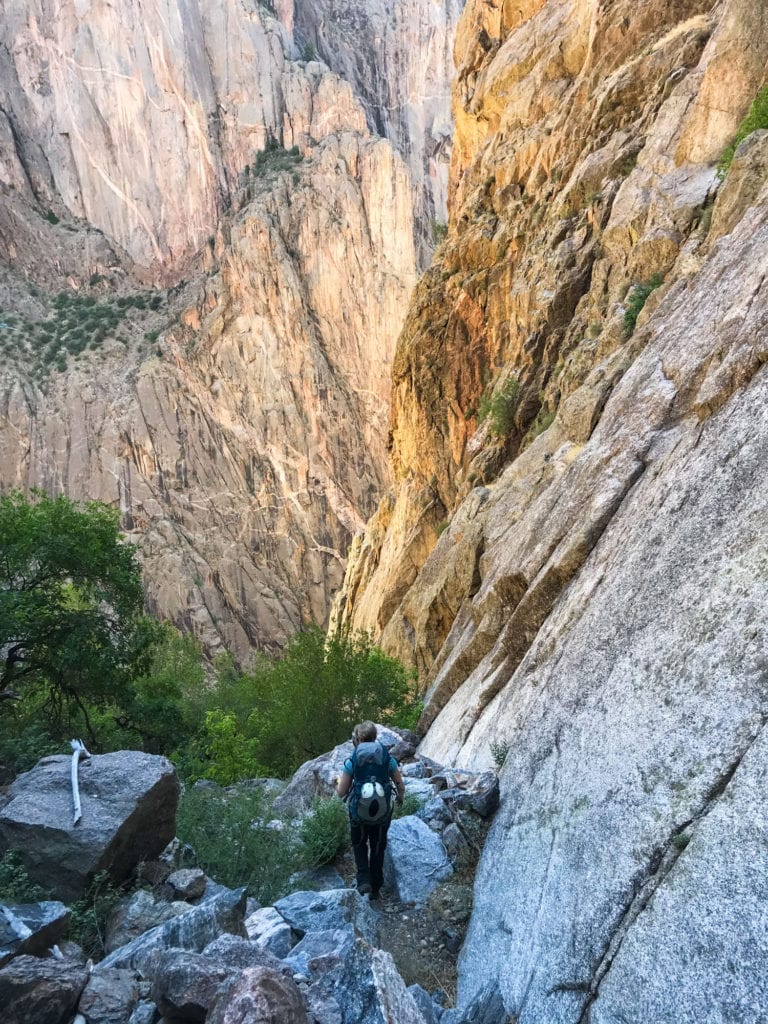 Hiking out of the Black Canyon

So we trekked on and started the climb back out. What came next was not pretty. With a constant pounding in my heart, aching back, burning quads, and a level of exhaustion I had never felt before, we finally reached the second rappel, our first climb of the day. 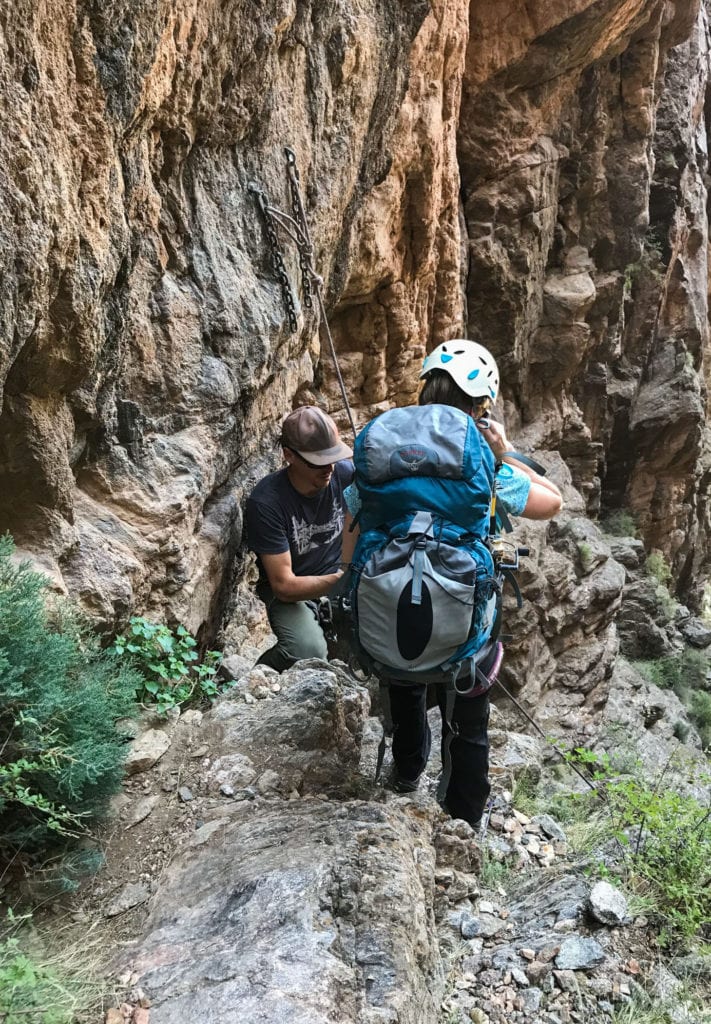 Our route in was our same route out

The plan was for my brother-in-law to go first and “hold” the rope at the top as I made my way up. I did everything but what you would consider climbing. I screamed. I cried. I yelled so many expletives and a common phrase of “I can’t do this”! But somehow I did. I made it up to the first rappel and then, by some miracle, the second rappel. It was not an option not to do it, or we would be spending another night in the canyon, which we had not prepared for. No, this was the only way out, so I climbed for my life. 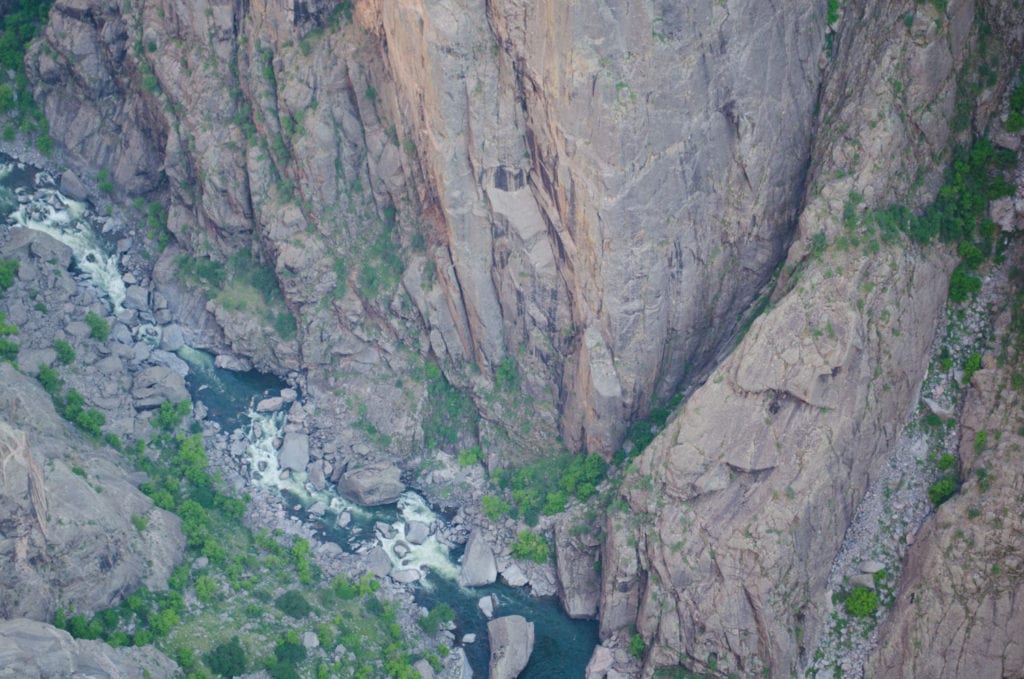 Views from the top of the Black Canyon

It was never a fear of falling but rather a fear that I couldn’t do this. Fear is a funny thing. It can take over your entire body, not just your thoughts, but your physical self too. It’s a power I am not even aware of until I am faced with no other option than to overcome that fear. And that is what I did that day, I overcame a fear of feeling like “I can’t do it”. And now with slightly more confidence in how I actually can DO IT, fear has started to take a backseat in my life. And I can thank backpacking in the Black Canyon of the Gunnison National Park for that. 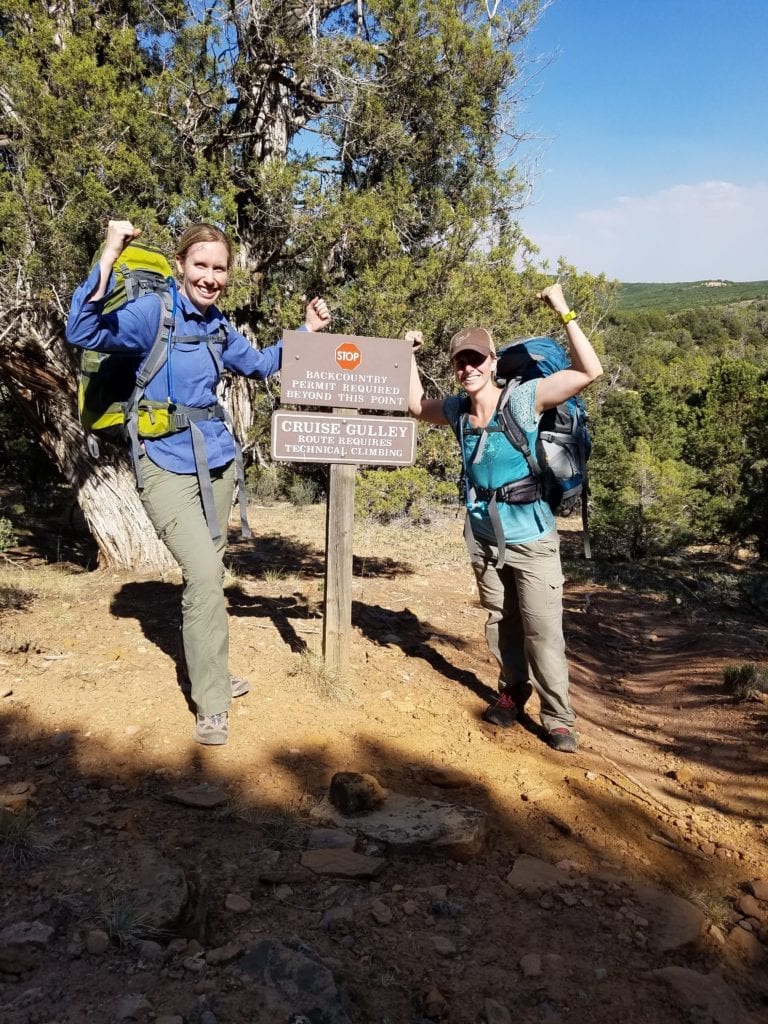 For more photos of Black Canyon of the Gunnison National Park visit my gallery page. All prints are for purchase. Contact me for details and pricing.

This entry was posted in My Love for Colorado, Photography and tagged Backpacking in the Black Canyon, Colorado, National parks.