As one of the largest high desert valleys in the world, the San Luis Valley, with its soaring jagged peaks of the Sangre De Cristo Mountains, rolling sand dunes, and eclectic personality, comes to life with the Monte Vista crane migration. Over 20,000 of these larger than life birds migrate early spring to the valley to feed upon grain fields, wet marshes, and meadows, before heading north to their breeding locations. Visitors can catch a glimpse, as the cranes put on a show of flight, extravagant dancing, and confident struts. Complete with Mount Blanca towering in the background, this is a site that shouldn’t be missed! 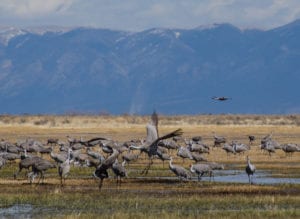 As a celebration of this magnificent show Mother Nature puts on, the town of Monte Vista hosts an annual festival in early March, the Monte Vista Crane Festival. The town showcases arts and craft show, bird tours, and wildlife photography classes. In an interest to learn more about the cranes and their migration (and improve upon my photography skills) I took one of the photography workshops. After spending 12 hours out in the field with the wildlife photography experts from, In Light of Nature, I learned a lot about these fascinating creatures and the art of capturing them in motion. Much more educational than I had expected, I gained some fun facts about these captivating birds:

5 Facts about the sandhill cranes 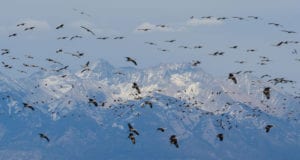