Why You Should Visit Meknes & Rabat 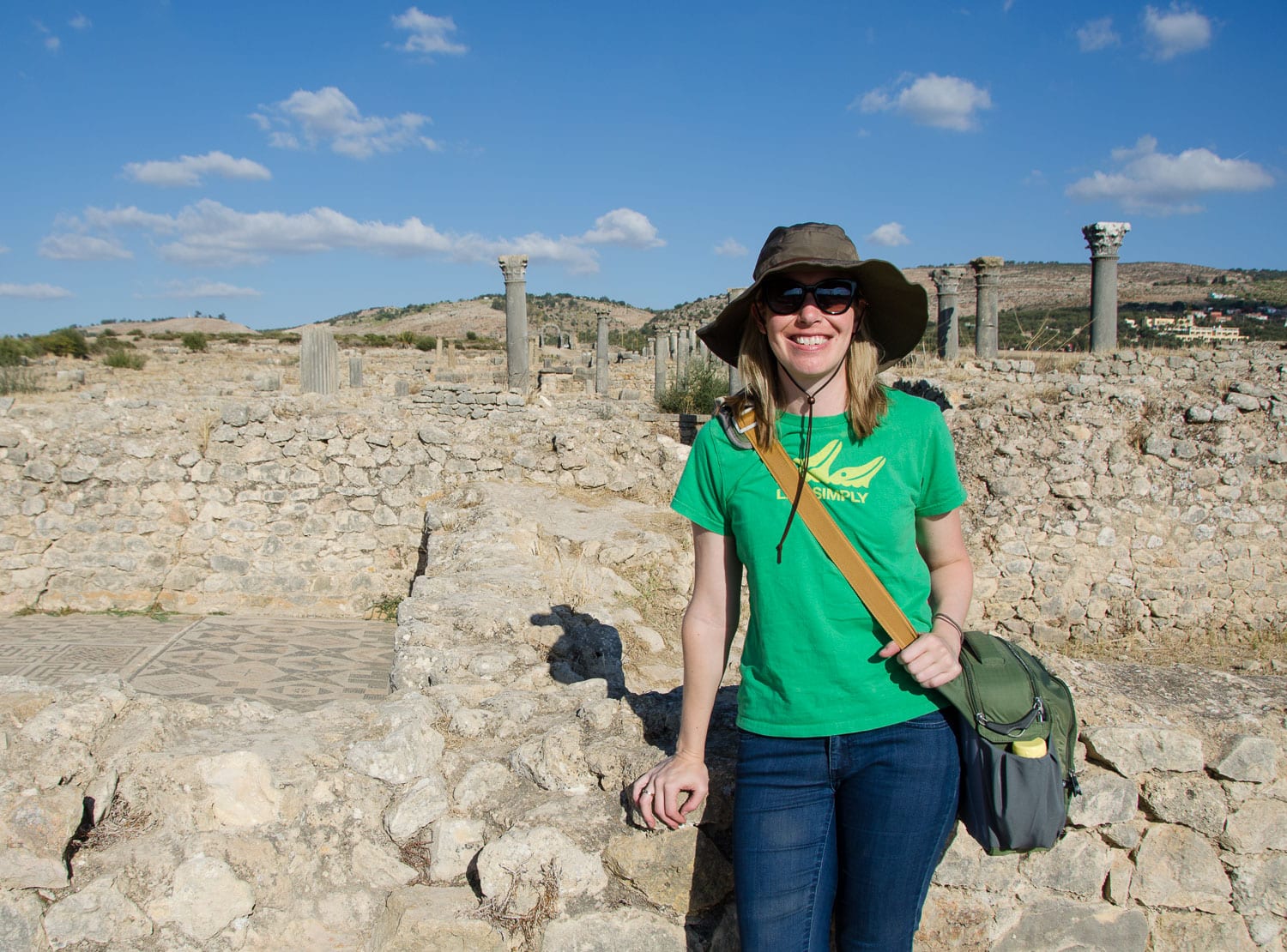 Salaam Alekum (hello in Arabic)! Trying to decide where to go in Morocco? Be sure to visit Meknes and Rabat for a unique perspective of Moroccan culture and history.

I traveled by train from the hectic streets of Casablanca to the capital city of Rabat. Rabat offered a much more modern look with more sophisticated businesses and cleaner streets.

I joined two lovely Australian ladies I met in our group for a walk through the medina to get to the Kashan des Qudaias. This was my first time in a medina, which are the older sections found in the cities of Morocco. They were built with high walls and tiny crowded streets – perfect for getting lost. If you want to see the heart of the city and its people, visit the medinas. Just be sure to move out of the way for charging donkeys, that will quickly run you over! 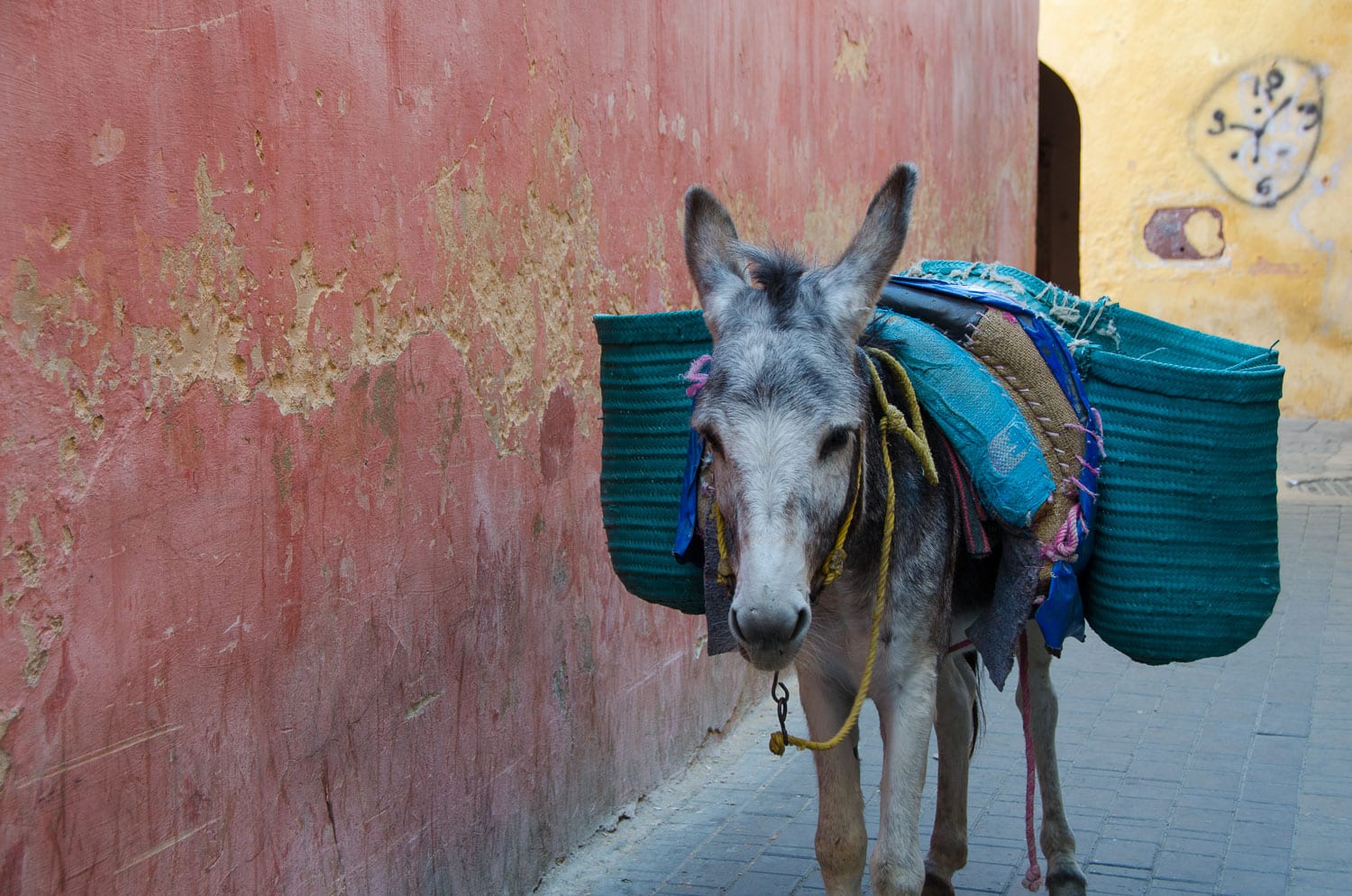 The Kashan des Qudaias offered up quite a picturesque scene. Walking through the brilliantly blue lined streets, we were greeted with locals who were telling us “welcome to Morocco” (we were quite obviously not from Morocco). 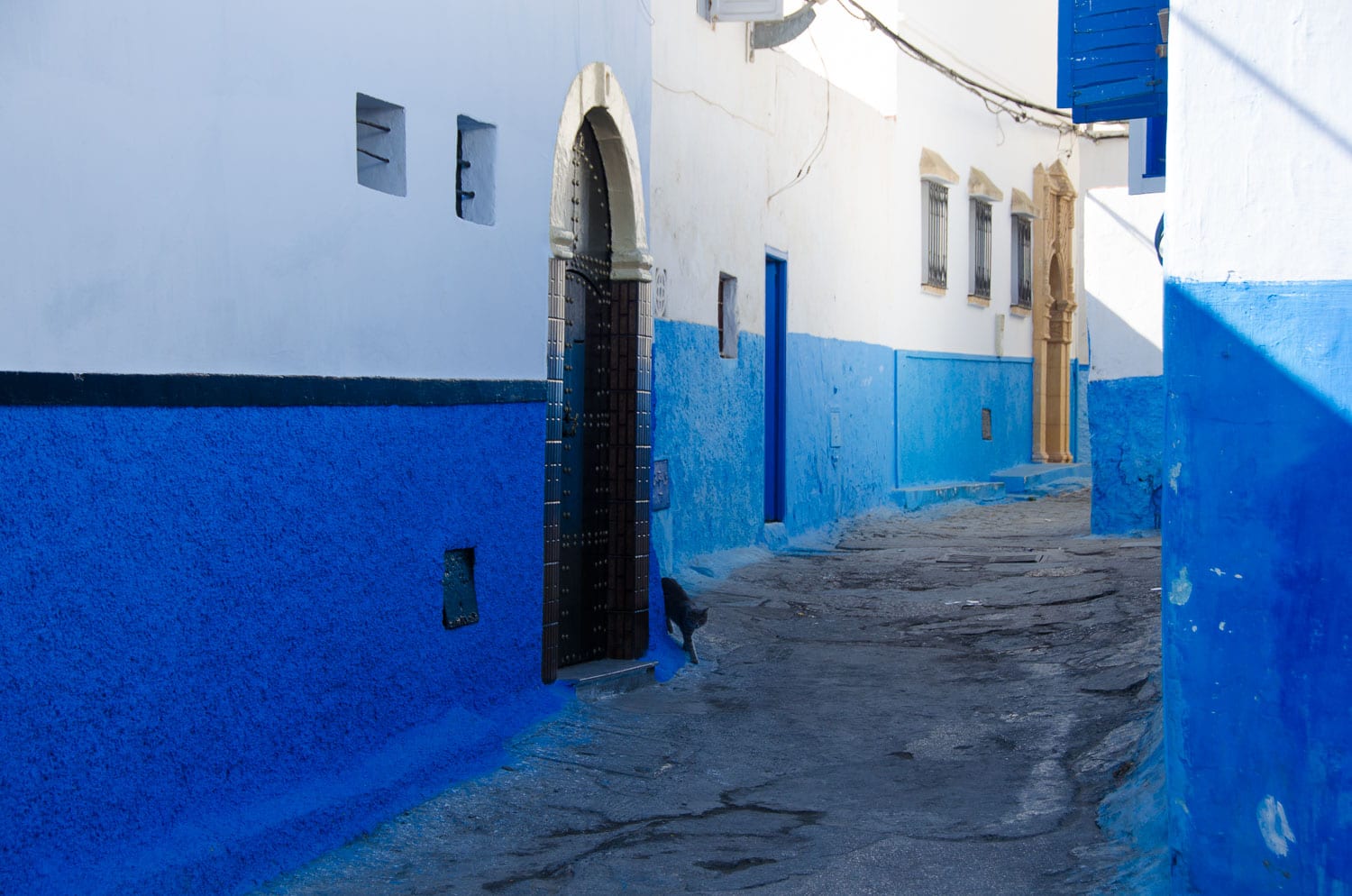 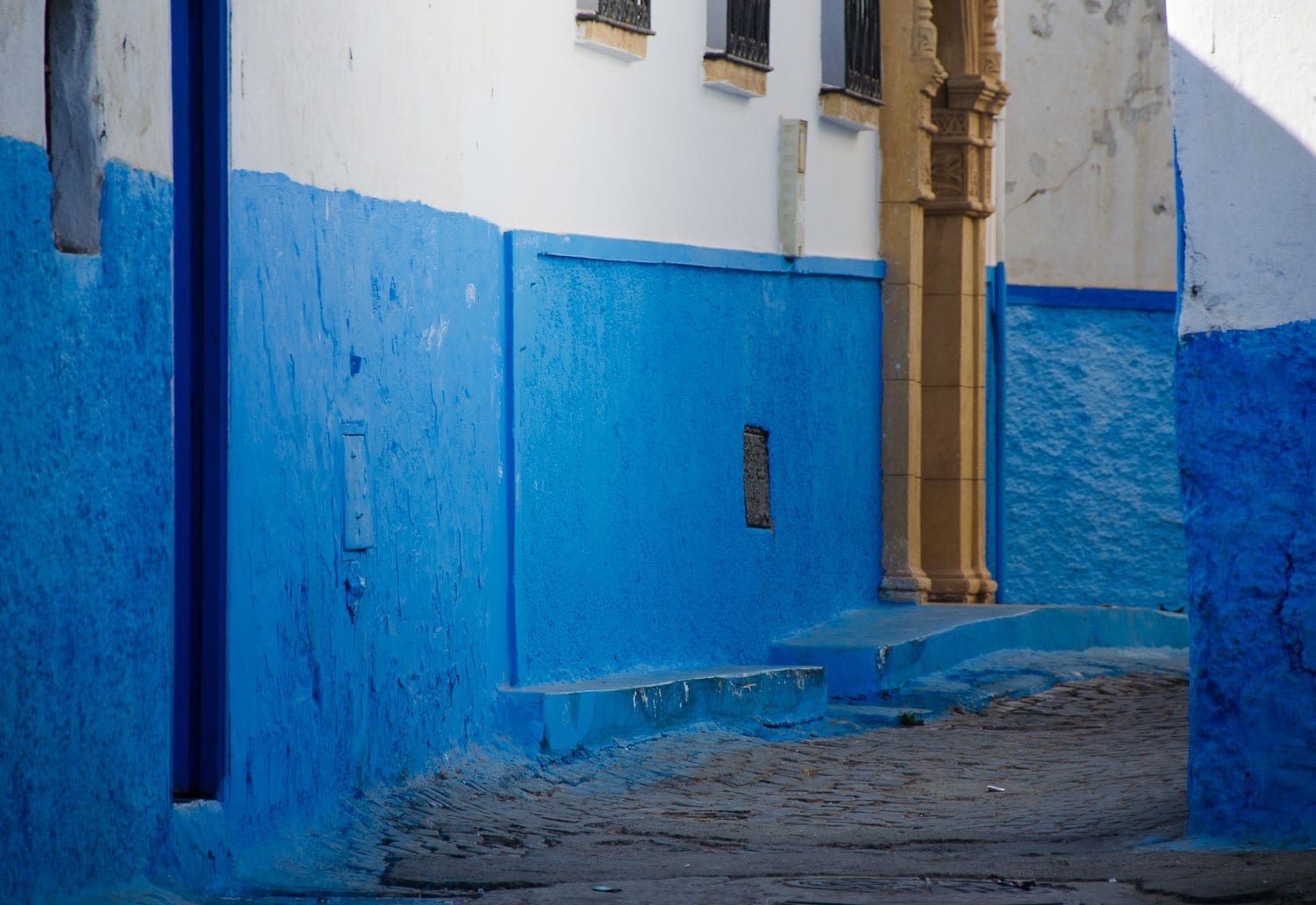 As we came to the back side, we were met with sweeping views of the Atlantic Ocean. Beaches stretched for miles, with beautiful views of the city to compliment. Venturing over to the intimate cafe that overlooked the water, we sat down to sample some Moroccan mint tea and pastries. Mint tea and pastries are a staple here in Morocco. Moroccan tea is still the best tea I have ever had. 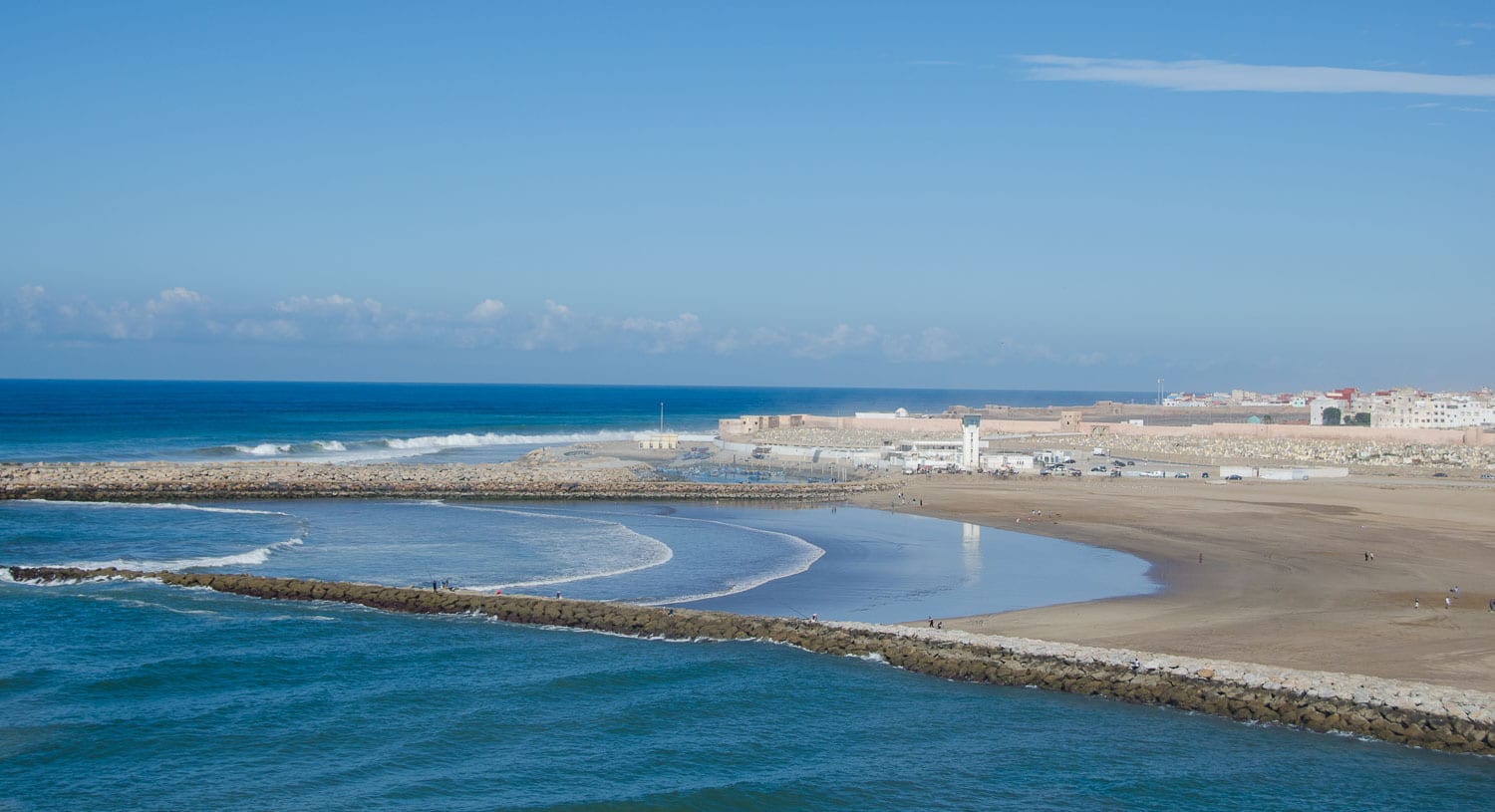 We then ventured on to see the Hassan tower and the Mohammed Mausoleum that holds one of the past kings of Morocco. I do believe it is the only Mausoleum you can view in public. The colorfully dressed guards stood at the entrance to this structure as a tribute. The Mausoleum, inside, contained incredible mosaic tile work with such intricate details that spanned from ceiling to floor, leaving me a bit disappointed I couldn’t take pictures. 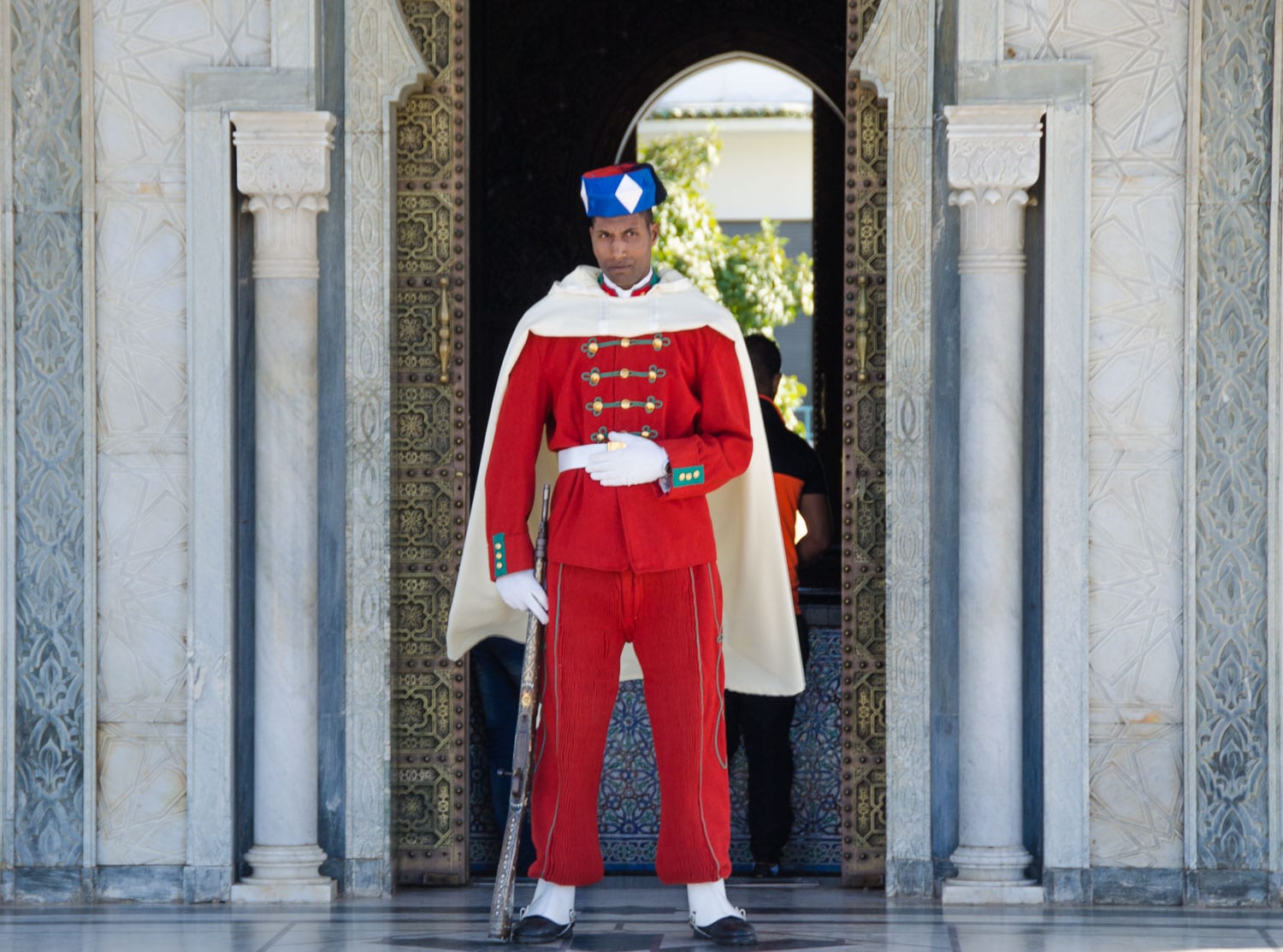 At the end of the day, we were to catch a train to Meknes, which used to be the capital city of Morocco. Built when Sultan Moulay Ismail wanted to create his own version of Versailles, he used over 50,000 slaves to construct walls, gates, and 50 palaces, some of which can still be seen today.

The next morning we visited Heri es Souani Granary, a once royal but still massive architecture feat, that is now a crumbling palace. One of the highlights was walking through the old horse stalls that housed over 12,000 horses and slaves at one time.

As we left the palace we headed into the medina of Meknes where I ate, for the first time, a camel burger. We sat in a small room, that was no larger than 50 sq ft., with the man who was cooking the camel burgers in a stall next to us. I have to say it was pretty tasty and very well prepared….something I would have again.

Hoping in our private minivan we drove through the countryside, which was nice to see after being in the hustle and bustle of the city. 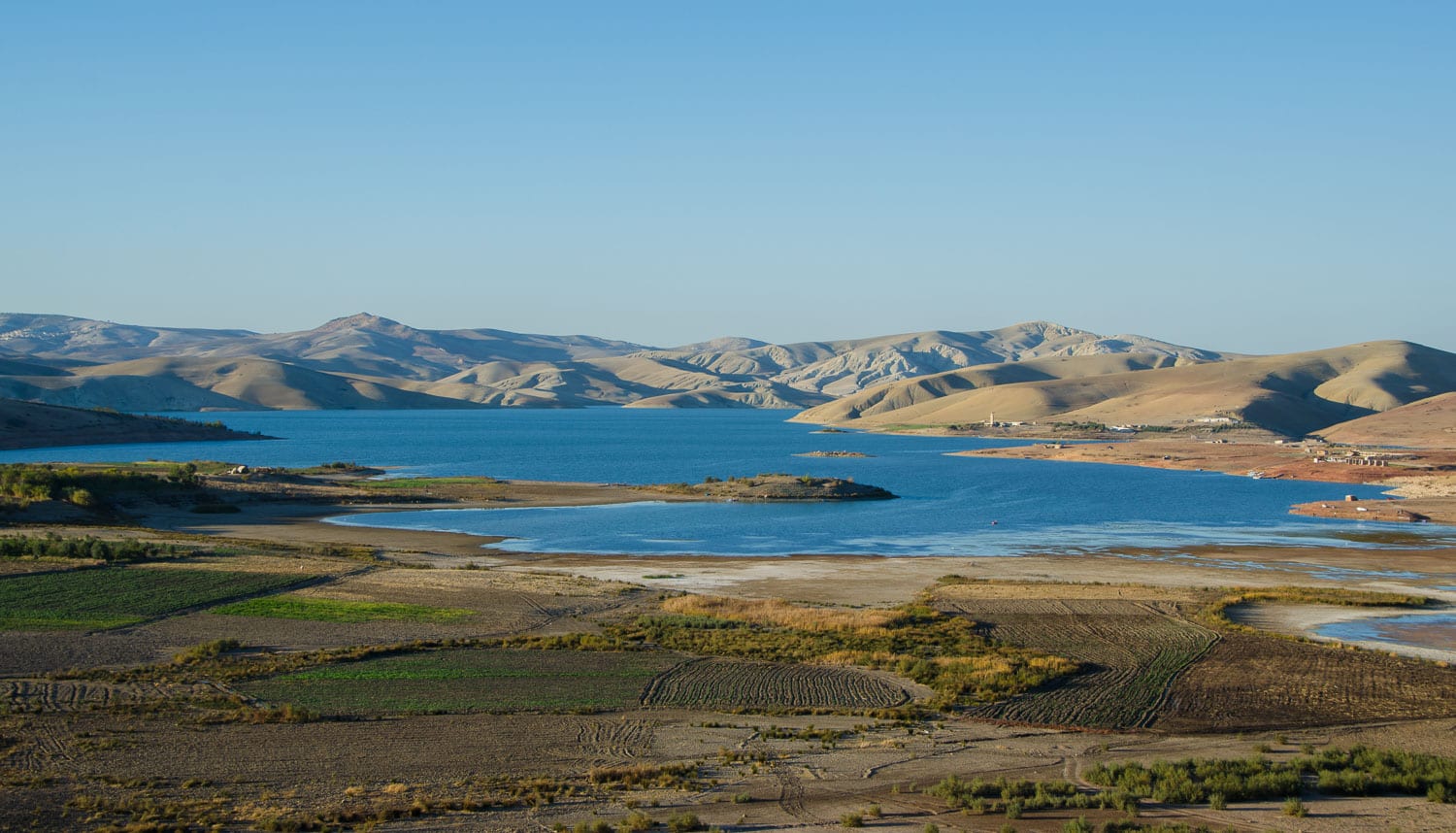 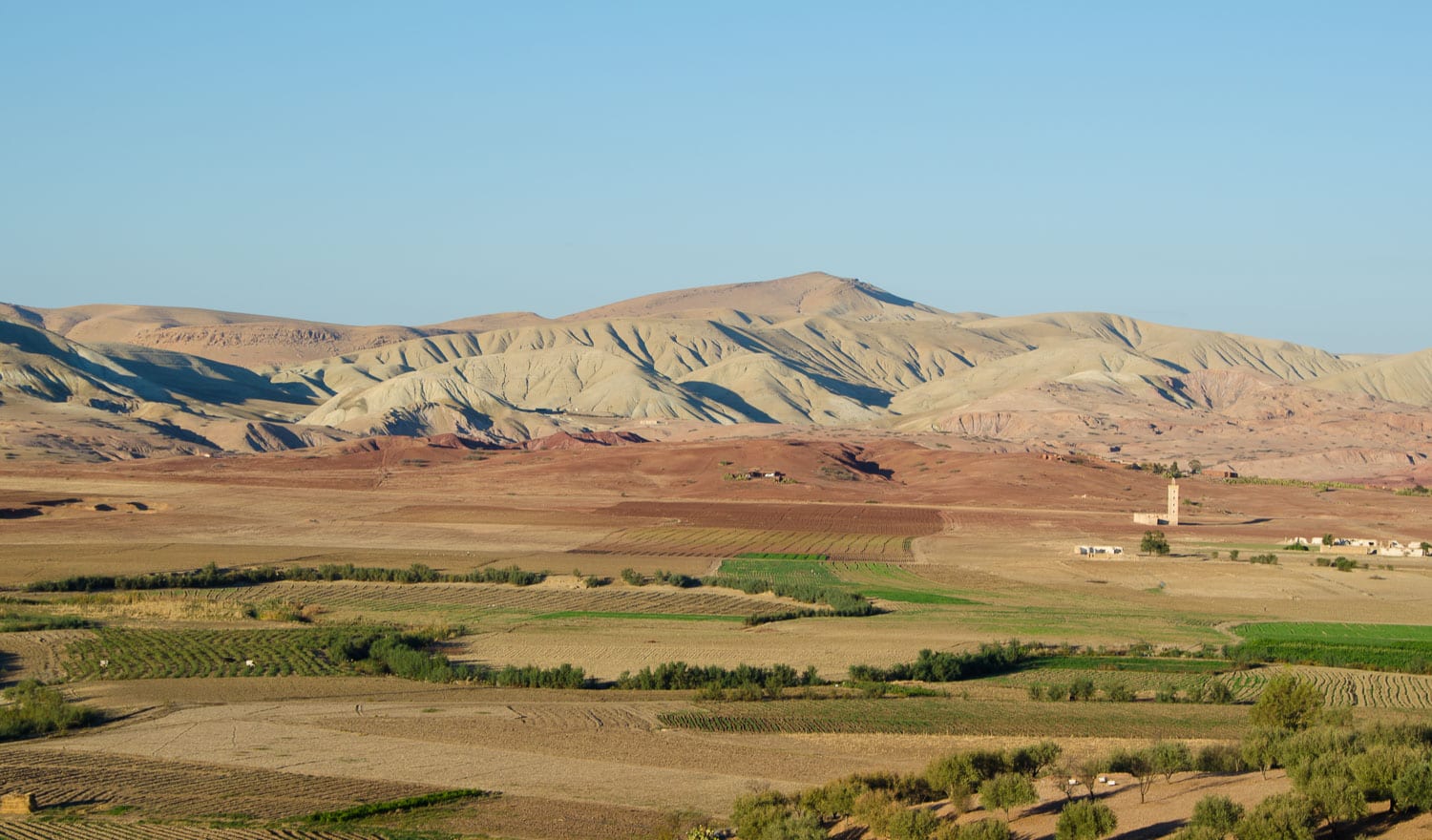 Due to the major drought, the country was experiencing, most of the landscape was brown and dusty but still, we were able to see thriving olive groves that swept most of the countryside. Next, we were headed to the archaeological site of Volubilis. 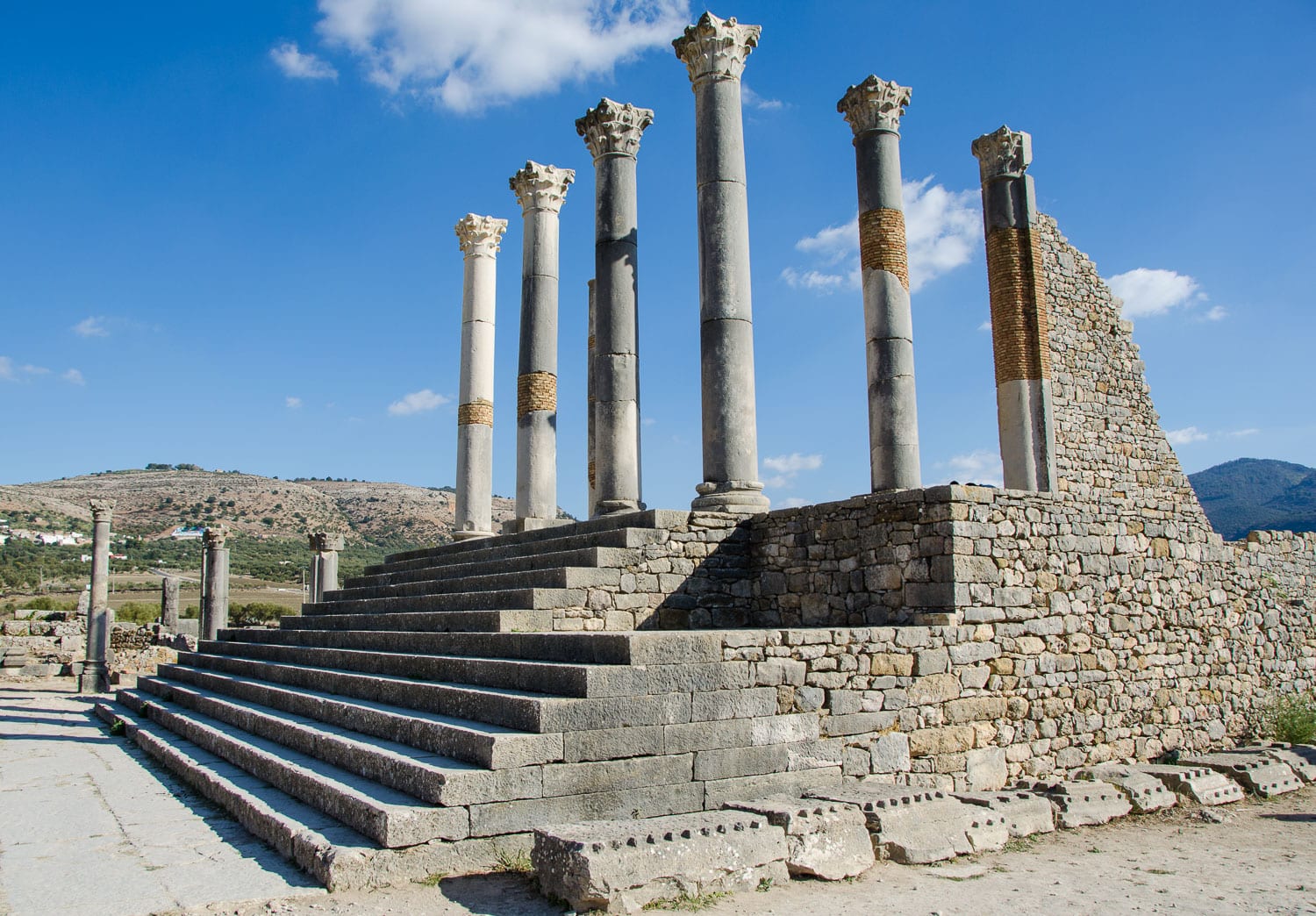 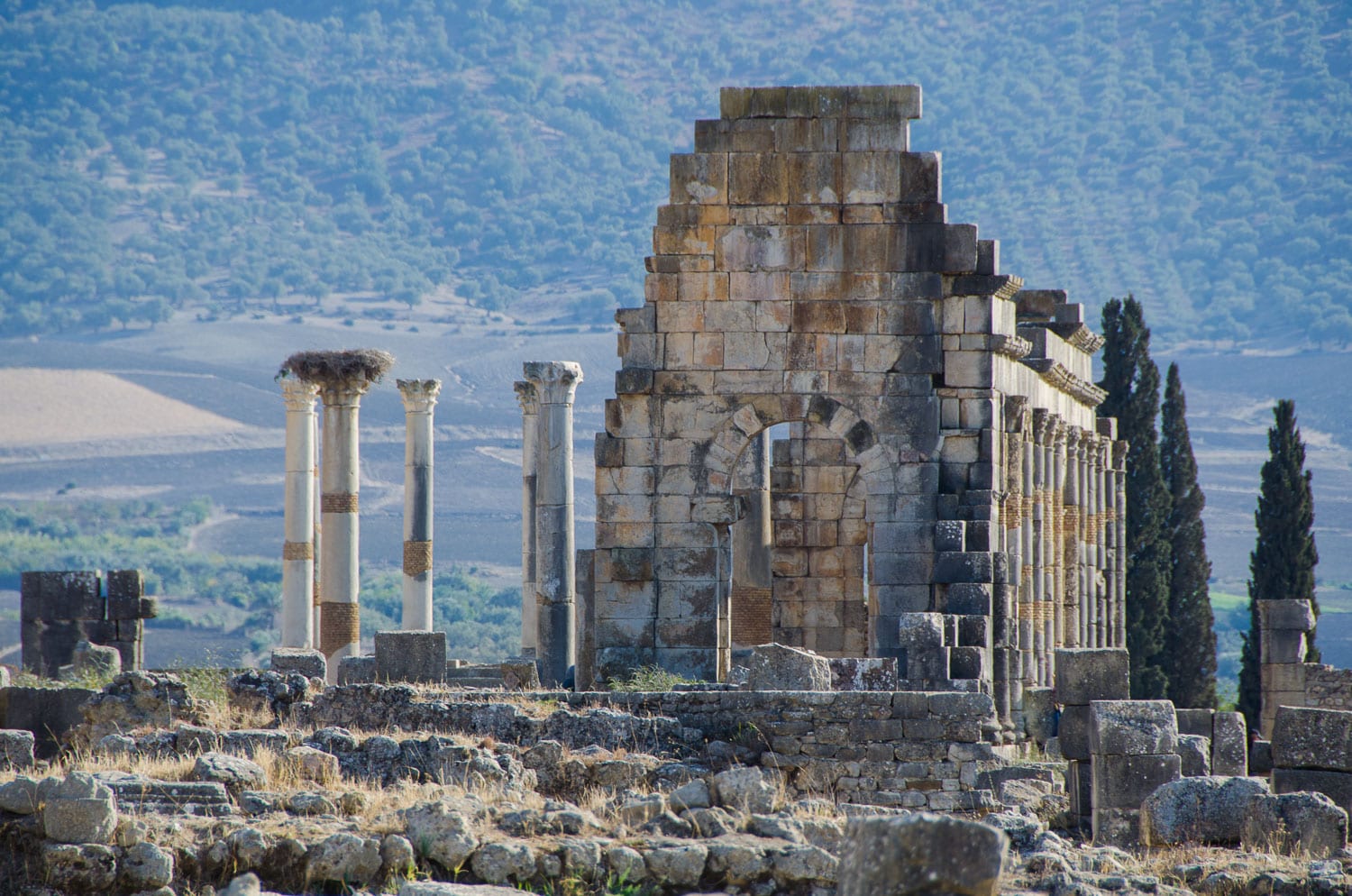 This once provincial Roman capital city still stands with evidence of a once mighty society. A guided tour took us through the grounds, learning about each of the structures that had been left behind. Coupled with the views of small villages tucked away in the rolling hillside, this was one of the best views I had seen so far while in Morocco.

Despite the push to modernize the big cities, Morocco still keeps its charm, history, and culture within its remote countryside and cities like Meknes and Rabat.

For more about Morocco, visit my blogs here.