“Those who look for the laws of nature as a support for their new works collaborate with the creator.” – Antoni Gaudi

A big part of my time spent in Barcelona was visiting and photographing works from Antoni Gaudi, who is a well-known architect from Catalonia. A man with a very distinctive style and known for ushering in an entirely new take on modernism. His inspiration from nature was evident in all of his work, something I definitely understood and gravitated towards. What intrigued me the most was that he hardly ever drew out detailed sketches or plans of his work but rather he created three-dimensional scale models. Most of the places I visited provided these models for viewing and found them just as interesting as seeing the real thing.

Starting off my Gaudi overview I bought the full audible tour guide for the Sagrada Familia (costing 29 euros), a roman catholic church located in the heart of Barcelona. This is by far his most famous masterpiece that is still to this day unfinished with plans to finish in 2026. Construction began over 130 years ago and has gone through many trials and tribulations as it almost ended construction upon the architect’s death in 1926. 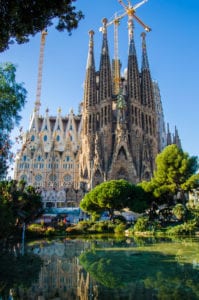 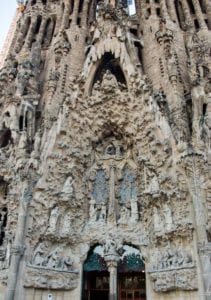 As I approached the church the sheer height of the building was astounding, offering a distinctive detail in the Barcelona skyline. Once completed there will be 18 different spires to symbolize the Twelve Apostles, Virgin Mary, Four Evangelists, and of course Jesus Christ. The highest spire, representing Jesus Christ will give the church its tallest height of 560 ft, making this the second tallest point in Barcelona, just second to the Montjuic Hill. The height was purposefully designed to not be the highest point in Barcelona because Gaudi believed that anything that man created should not sit higher than anything created by God, or in my belief by mother nature. 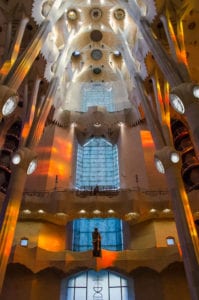 Inside the entrance to Sagrada Familia

Instantly I understood why it has taken so long to finish construction, the intricate and beautiful detail is absolutely astounding and unlike anything I had ever seen. It easily took 45 minutes just to view the outside before even entering beyond the front doors. Once inside I stood before giant ceiling vaults reaching 200 feet in height and oversized stained glass windows in multiple different shapes coloring the inside in greens, reds, yellows, and blues. To try and describe every detail of this place would be nearly impossible because every inch offered something different to look at and gaze upon. Listening to the audible tour guide I learned that almost every detail of this church was inspired by different elements in nature, the most obvious being the tall ceiling vaults which were meant to represent a spiritual forest with the columns acting as trees branching up to the ceiling. 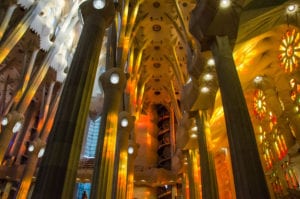 Tall columns meant to represent trees in the forest. 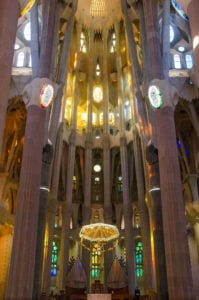 Facing the altar of a hanging Jesus

Being inside this church was like being inside of a psychedelic dream….. a dream I didn’t want to wake up from. This was the best place to kick off my Gaudi experience.